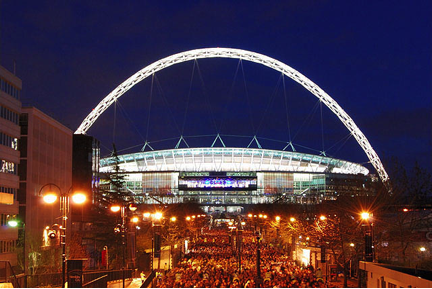 The new Wembley Stadium was designed by Foster + Partners and HOK Sport. While construction broke ground back in 2002, it ran into several snags along the way. The construction project was finally finished in 2007, and it opened in March of that year.

The 90,000 person capacity stadium is home to the English national soccer team. It also hosts the Rugby League Challenge Cup, other high profile sporting events (including NFL football), and even huge concert events. Despite its epic proportions, Wembley Stadium gets a surprising amount of efficiency and sustainability due to its cutting-edge design and facilities.

Over the past year, the stadium achieved some astounding environmental figures:

Those are all astonishing reductions in emissions, waste, and energy. Excel Dryer, being the major supplier of electric hand dryers for Wembley Stadium and a company deeply concerned with green building, is proud of all of Wembley Stadium’s accomplishments.

For 2013, we’re looking forward to all the excitement on Wembley’s pitch, and maybe even more, what sorts of greening and environmental innovations they can come up with again.